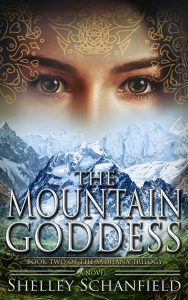 Book II in the Sadhana Trilogy.

A beautiful warrior princess. A tormented prince. A terrible choice between love, duty, and spiritual freedom.

Rebellious Dhara runs away from her Himalayan clan to study with powerful yogi Mala, a mysterious woman with a violent past. When war threatens, Dhara embarks on a journey where she meets Prince Siddhartha and captures his heart.

Wealth, pleasure, and the warrior’s powers seduce Dhara, while Siddhartha’s longing for a sage’s life intensifies. Their son’s birth brings on a spiritual crisis for the prince.  If he leaves his kingdom to seek enlightenment, he turns his back on love and duty and risks destroying his people. Only Dhara can convince him to stay…

Awards and Reviews for The Mountain Goddess:

“Schanfield has created a vividly described, fully realized world inhabited by a cast of authentic characters that readers will connect with emotionally…this is an epic story of love, loss, war, and prophecy. Fans of grand-scale historical fiction from writers like Guy Gavriel Kay will find this well worth the read.” Blue Ink Reviews
“…a fantasy version of ancient India that chronicles a young woman’s quest and the rise of the Buddha…an engaging, vivid work of impressive scope… the novel imaginatively populates the historic world that gave birth to a major faith tradition…” Joseph S. Pete, Foreword Reviews, 4 stars

Goodreads reviews for The Mountain Goddess

The Mountain Goddess is available at the following retailers: